Alvin finds himself in a deserted landscape, filled with dangerous waste. Guide him through this aftermath of unexplained events. The further you go, the more waste you can clear, and your mission gets progressively harder. There may or may not be an end... 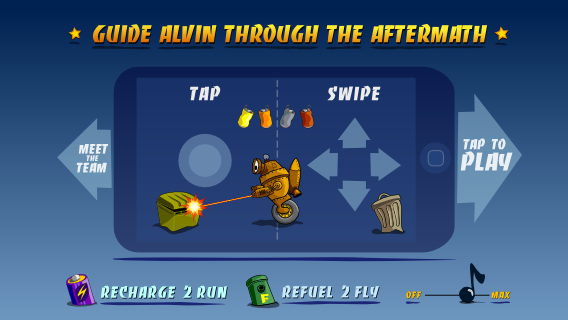 We'd love you to experience Aftermath Alvin for yourself.
If you wish to see gameplay video here's a recording from the platform simulator.

Legend has it that..

Fuel cans are less of a commodity than they seem. Also, unlike batteries, they are flammable, so don't zap them. Objects in air can be costly (or profitable) to hit.
We really don't know what's with the electric poles.

Aftermath Alvin is compatible with iOS 5.1 and above, and should run fine on iPhone 3GS and above or iPod Touch 4 and above. Retina graphics are not required, so try it if you have an older iPod Touch too.

Aftermath Alvin is the result of a five day game development run. We wanted to see where we could take things if we started from scratch. (tbh we needed a short break from working too hard on Clouds of Steel). If you like Alvin, we promise to polish it and release an HD version.

Hey, we actually like reading emails. Jot us a line!